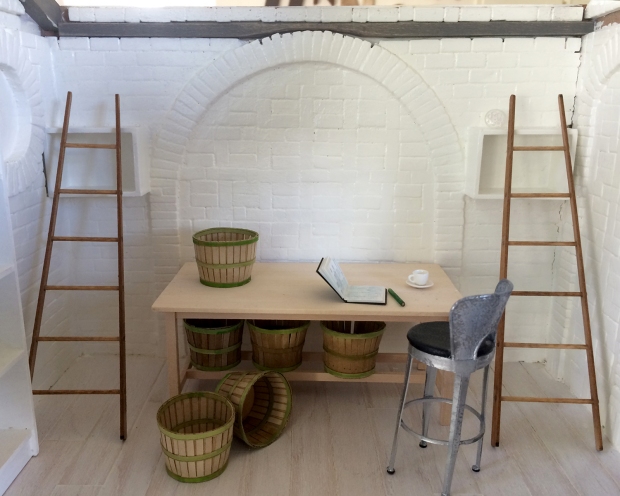 I wound up making six bushel baskets from Kris Compas’s tutorial. I used one-inch wood circles that I had on hand for the base, and after the second basket, redrew the pattern so all the uprights were like fringe, instead of individual slats. (The pattern is up on 1inchminis. There’s also a version to print multiples. Yay no measuring.) By the fifth or sixth basket I was getting a nice bulbous curve by shaping it over the top of a two-ounce acrylic paint bottle. Coopering the top rim was also much easier on the paint bottle form.

I’m working mostly on the new project now, but the in-progress Argo Wool Works Showroom is a nice bright place to sit and think and plan, with a cup of tea. (The ladders are by Sir Thomas Thumb, to be used to display hanging goods. I also splurged with the 2015 contest award and bought a scythe o_O)

7 thoughts on “Hide one’s light under a bushel”