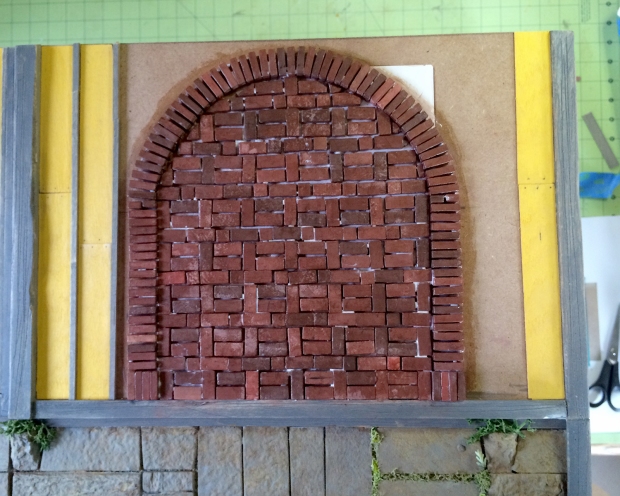 After tipping the build backside up, and using the same pattern as on the inside wall, I glued on the bricks and sealed them with Mod Podge. I favor these bricks by Andi Mini Brick & Stone because they’re a solid color throughout, well-priced, and easy to cut. 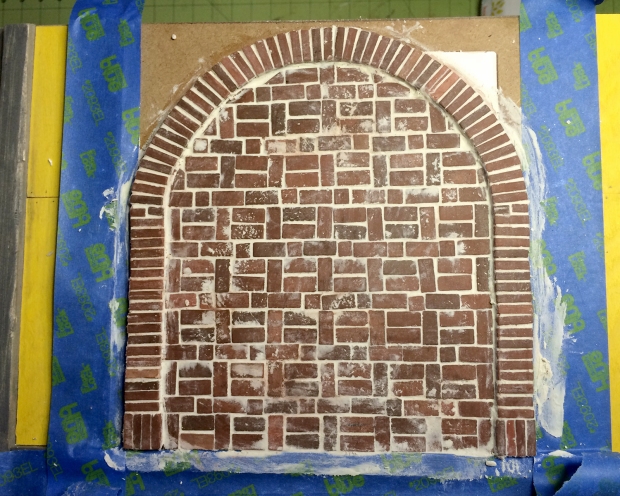 Mortared with a palette knife and gloved fingers, using DAP Crack Shot. This and the following shot were photographed at night by ambient light of my Luxo lamp, hence the color variations.

Gruzz brushed on with gray and deep green powdered pastel.

Finishing out the rest of the farmer style board-and-batten siding. Yay for using up offcuts. Fooling around with preserved reindeer moss, mostly roots and mid-structure  (rather than the rounded top mounds) to give a slightly more lichen-y feel.

The finished-for-now back wall. I added some floor board remnants and foundation elements to the existing structure. After carving out a lot of mortar and rounding all the exposed brick corners, I sea-sponged on a thin white wash of white acrylic, then re-scrubbed individual bricks clean. The siding nailheads are made with a soft-leaded pencil tip rotated in place, then wiped downwards with a fingertip to create stain trails. Convincing!

Now I have to do a bit of research on street names and sign styles of 1906 San Francisco. I’m tempted to use my old address, but have to see if the area was even developed then. (It was in the outer Richmond, near the backside of Sutro Park.) Alternately I could cut a very fine stencil of the Argo Wool Works logo

My final offering is this delightful piece filled with the pure light of truth, by one of my very favorite contemporary writers, Mallory Ortberg of the-toast.net

2 thoughts on “Back Brick Arch”

get the fabulous things

That state of mind where all things are possible. Transformation — always possible. Some in the process of becoming, others might already have been. What will be? Designer and modern miniaturist Nancy Enge sets her inquiries here. Pose your beautiful questions to nancy@nancyland.com.