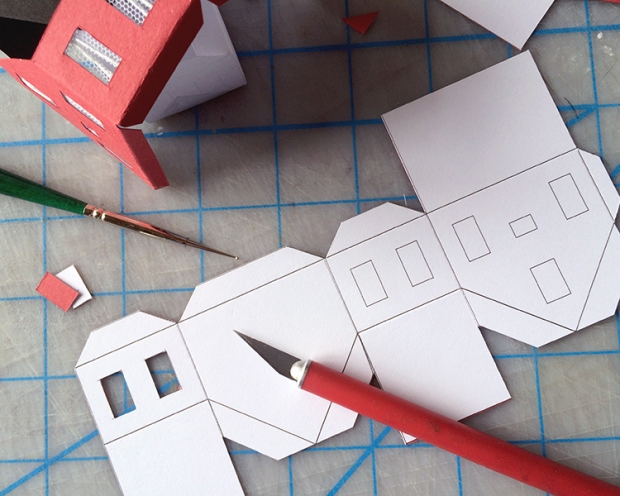 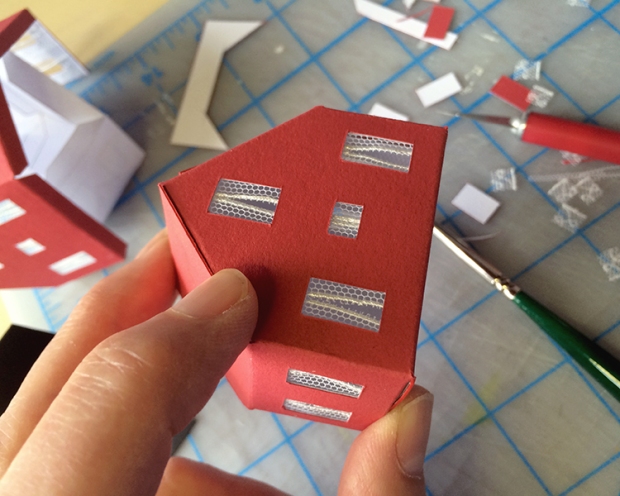 I ran a red marker on the cut edges to cover the white paper, from the white side so that if my hand slipped, I wouldn’t scribble on the red cardstock. (Lesson learned from v1.) The addition of roof flaps made it far more stable. I had exactly enough lace left to make the new curtains. The interior is left white to reduce contrast with the curtains, because after all, it is unfurnished :) 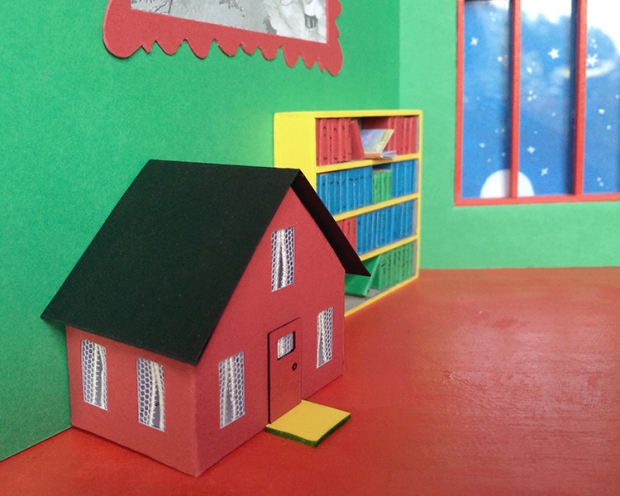 A little toyhouse in the great green room

For the door, I duplexed black and red cardstock so that the black made an outline. The porch is 1/16-inch basswood covered in yellow cardstock and edged with green Sharpie marker. On the back wall of the house, I punched three holes for the lights. The roof is still unglued to allow access; I’ll attach the chimney after that’s done. I’ll drill a hole in the foamcore wall for the wiring, but for now I want to keep the walls movable. 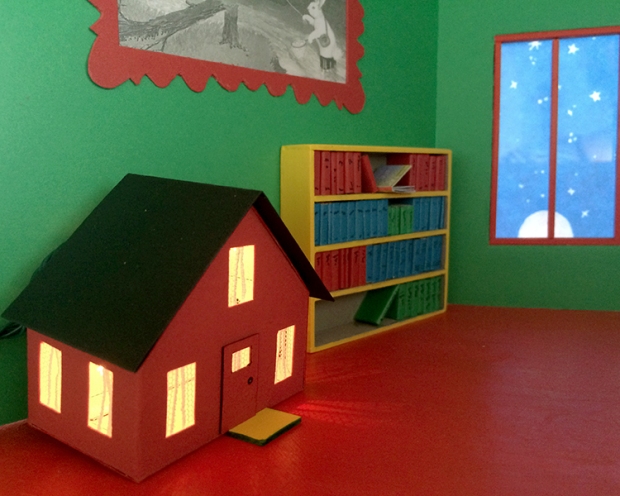 And here it is illuminated. I like the shadows cast by the net curtains. Very cheerful, yes? 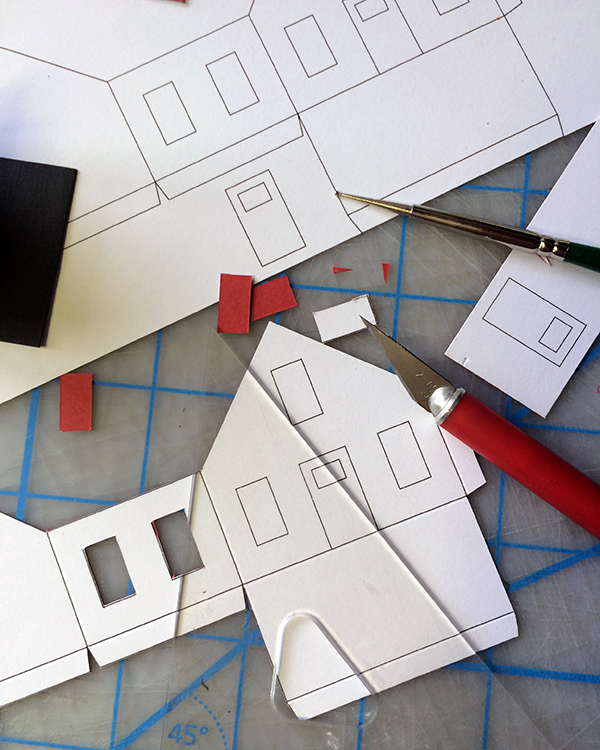 After working out the basic size of the little toyhouse, I started drawing construction plans in Illustrator. I decided to use cardstock because I think I can cut the tiny windows more square and more easily than I can in wood. After spray mounting a print out to the card, I scored and then cut out the pattern.

Mr. Hurd drew the little toyhouse in the great green room like this: 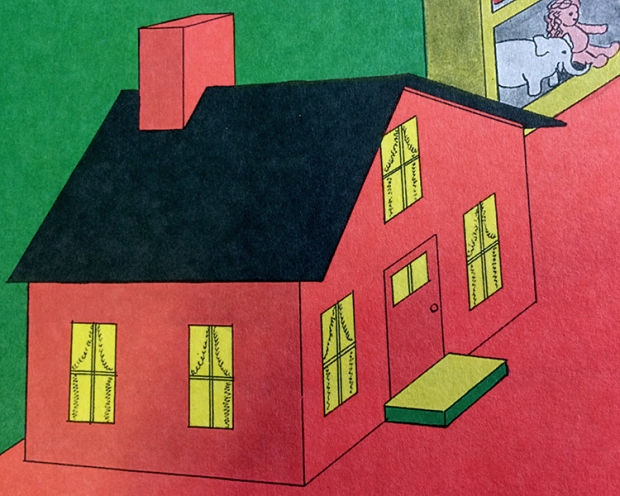 Next step was to mess about with the window treatments. 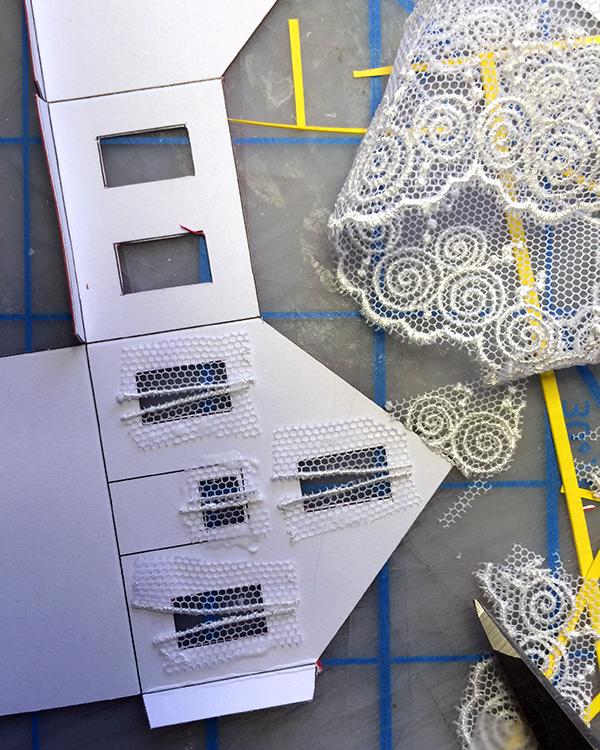 I considered yellow acetate with Sharpie line drawings (most accurate), but since the little toyhouse will be illuminated, I decided that the yellow = light, and moved on to contemplate the mullions, transoms and curtains as literal things. I tried cut yellow cardstock for the woodwork, but to achieve the proper scale was stupid hard. Such a difference between 2 and 3 dimensions. I then moved into the interpretive realm, and worked with a beautiful length of lace to suggest both. 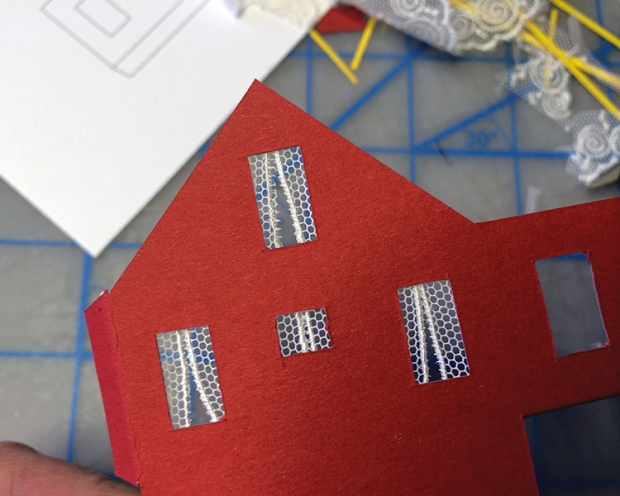 I am happy with my eventual solution, even though I cut away most of the “beauty” of the lace. It suggests mullions and transoms, and light lacy curtains, in an uncomplicated way that works with Mr. Hurd’s style.

I was hoping my first real model would work, but there were a number of structural errors and builder flubs that eventually disavowed me of that notion. I made notes and revised my drawing, then poured a glass of wine :) 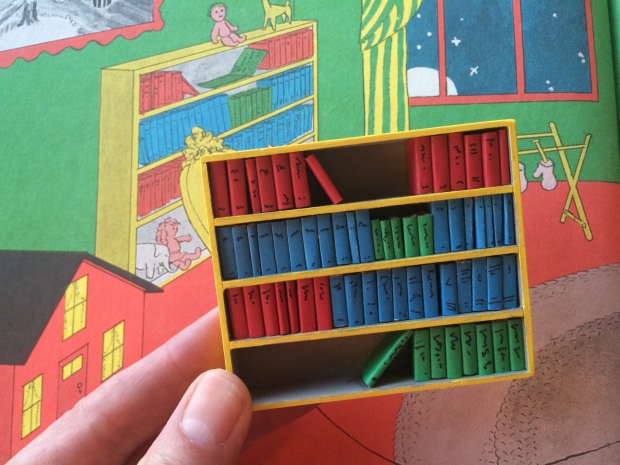 Since they’ll never be taken out and opened, I made cheater books to fill the bookcase from 1/8- and 1/16-inch wood, covered in paper. I thought of printing actual titles of my imagined bunny child’s library, but opted to mimic Mr. Hurd’s style. (When in doubt, I ask WWCHD?)

The copy of The Runaway Bunny, however, I decided to do “real”. I had to make an even smaller version from my first attempt to fit the bookcase, just a half-inch tall. 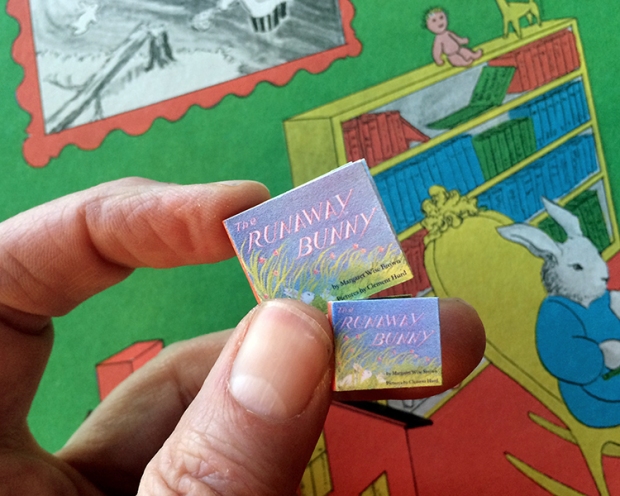 For the painting on the wall, I used the art (converted to grayscale) from The Runaway Bunny, “If you become a fish in a trout stream, said his mother, “I will become a fisherman and I will fish for you.”

The frame is hand-drawn and cut from a double thickness of cardstock. I tried to trace Mr. Hurd’s picture in both Illustrator and Photoshop, correcting for perspective and whatever, but found my sketching hand was more clever than technology in reproducing a workable likeness. Refreshing! 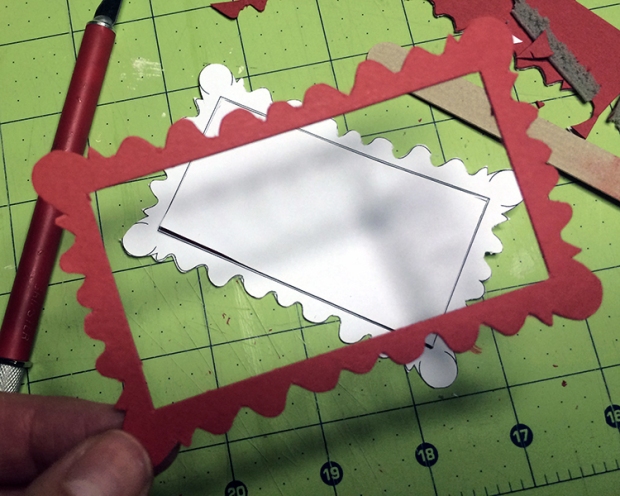 Pretty sure I want to make a full size frame that looks like this. 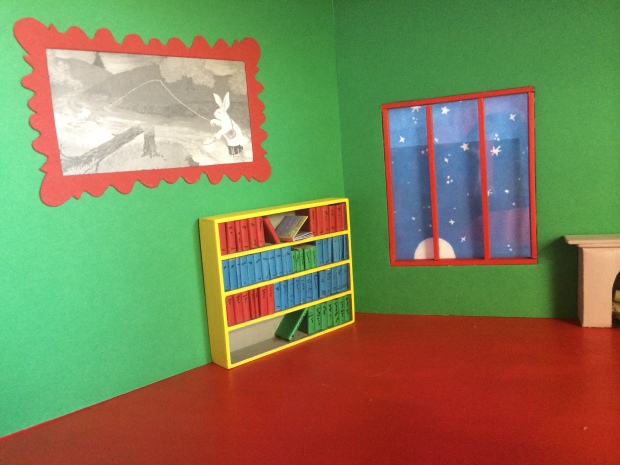 Think I’ll work on the little house next. 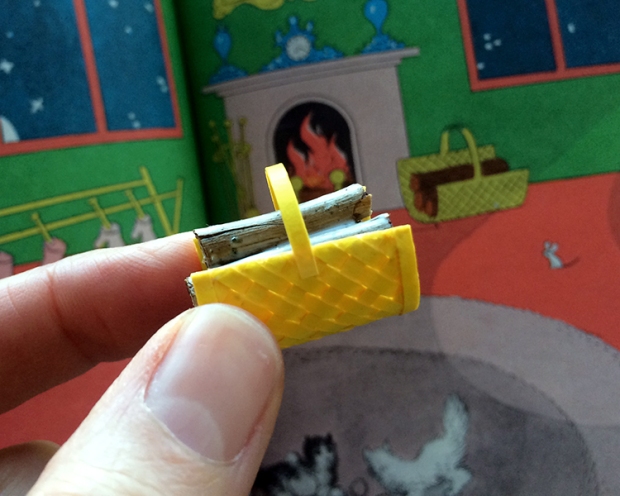 How to make a three-dimensional object from a painting and remain true to its 2D styling? For the basket of logs, I decided to go woven paper and real logs. After painting cardstock with the match yellow acrylic, I wove half-pica wide strips, then cut out the basket shape on the diagonal. (Yes, I switch measurement systems willy-nilly. Wood is almost always in inches, but my long years of graphic designery allows me to think and see in picas. It’s basically base 12, and very handy in 1:12 scale noodling.) 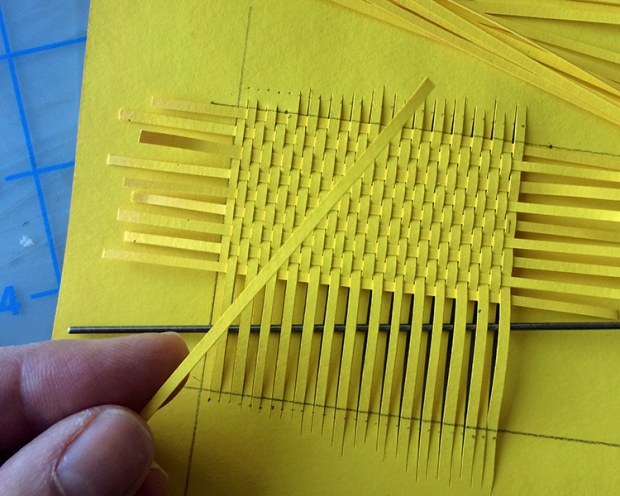 There are two other divergences from Mr. Hurd’s illustration: I stabilized the basket with an edging, and currently there are five logs in it.

I just liked the way it looked better. I toyed with the idea that five logs in the basket makes sense as the prequel to the great green room as famously pictured… I will probably go back to three logs. 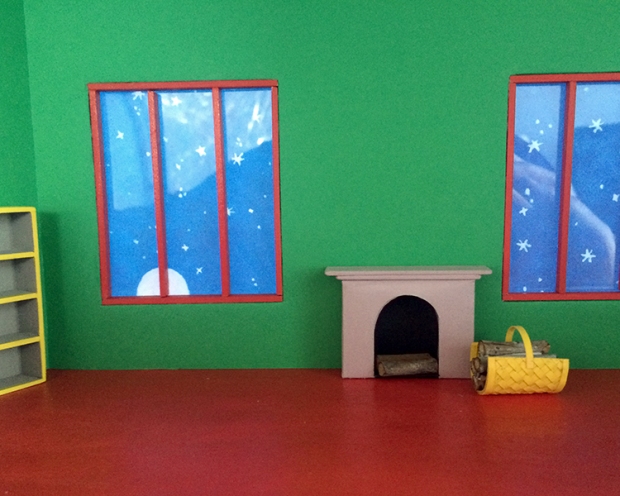 Before the fire has been lit, so *of course* there are five logs in the basket

We’ll slide more down the slippery slope of logic and time as the build progresses. 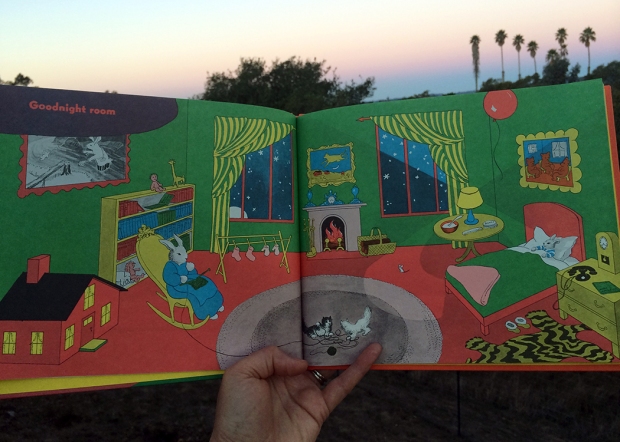 The great green room in “Goodnight Moon” by Margaret Wise Brown, with pictures by Clement Hurd

Goodnight Moon captivates baby Madeline as much as it did her mother, so for Maddie’s first birthday I’m building a roombox of the great green room. Here’s a picture (taken at dawn, actually) to mark when the idea came to me — and to show those of you unfamiliar with great modern literature and art — what the great green room looks like.

One of the notable features of Clement Hurd’s pictures is his use of flat, vibrant color. After several color studies, turns out it’s pretty much kelly green, vermillion and bright yellow. The how of the colors — whether to use paint or paper or polymer clay — is a figure-out-as-I-go-along. Similarly, what will be crafted from cardstock, built of wood and painted or modeled in clay. I am printing custom fabric for the curtains at Spoonflower. I briefly considered trying to 3D print some of the objéts, but there’s not enough time for me to learn the technology before her March birthday. (It has prompted me to enroll in a 3D class at Skillshare, though :)

For the walls, built of foamcore for lightness, I chose cardstock to cover, but I painted the floor. 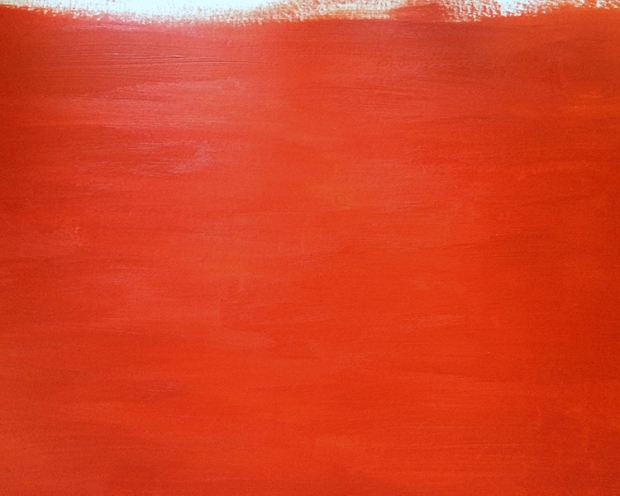 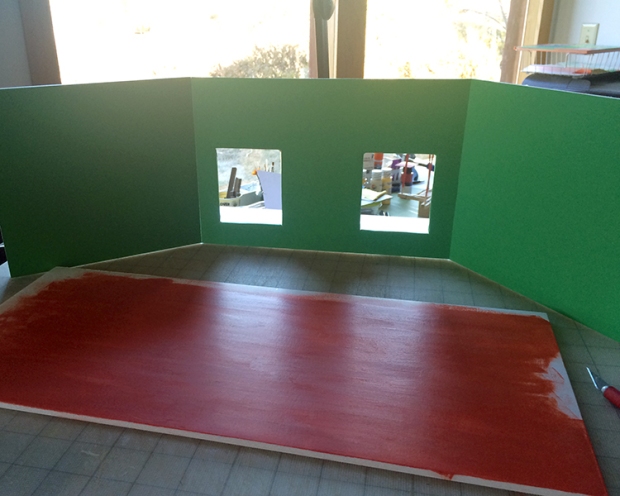 Many color and materials decisions were made.

Windows are trimmed in painted 3/16 x 1/8-inch basswood. I edited the views of starry night sky in Photoshop and taped them behind the plexiglass, temporarily for now.

The fireplace is built from cardstock, with a wood mantle. The fire will be illuminated. 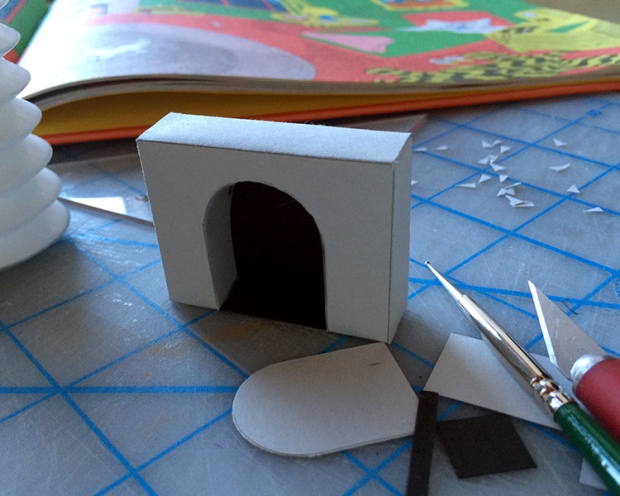 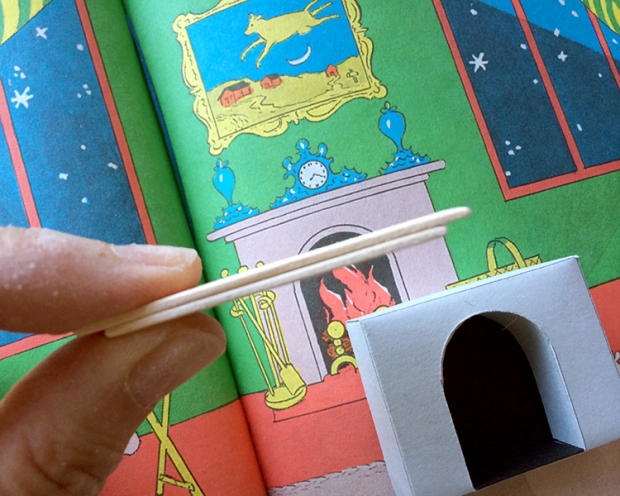 Here you can see my sawdusty fingers holding the mantle cut from 1/16 x 1/2-inch basswood. I matched the pinky-gray color and painted the assembly with acrylic paint. 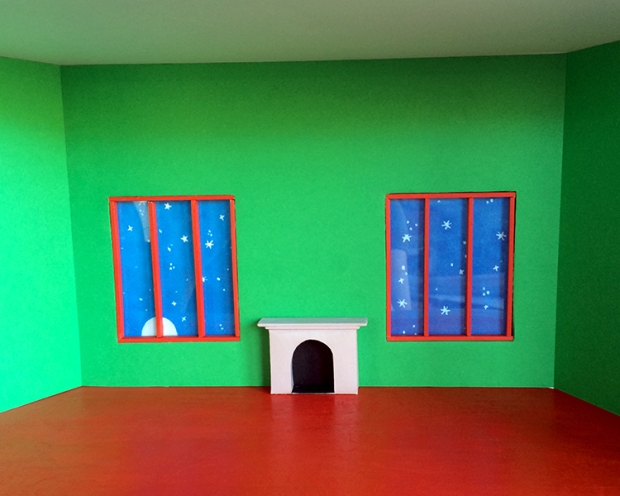 The great green room before the Bunny family moved in

You can see in the window trim gaps how not-90° I cut the foamcore, *cringe* but the curtains will (mostly) hide that imperfection.

Next is the bookcase, built of 1/16 x 1/2-inch basswood. When I was matching the yellow to paint, I noticed that the inside of the case is gray. What a curious detail. But hey, true to the great green room as painted by Mr. Hurd am I. 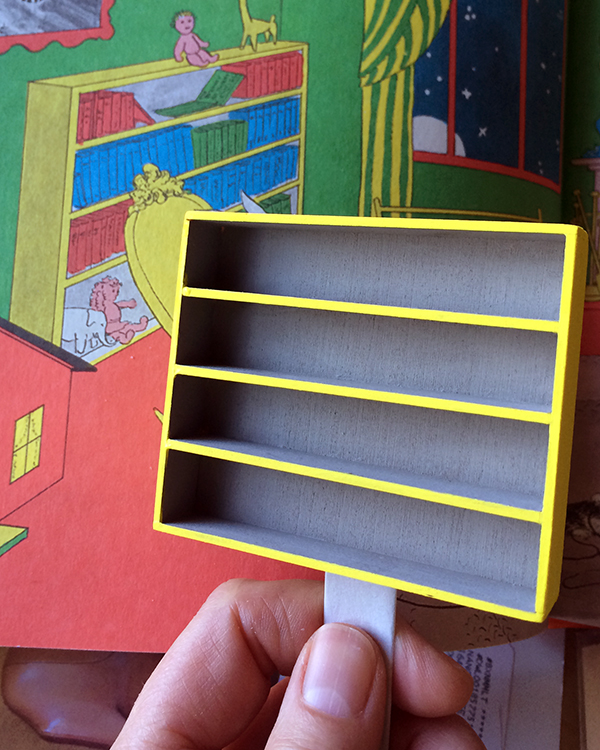 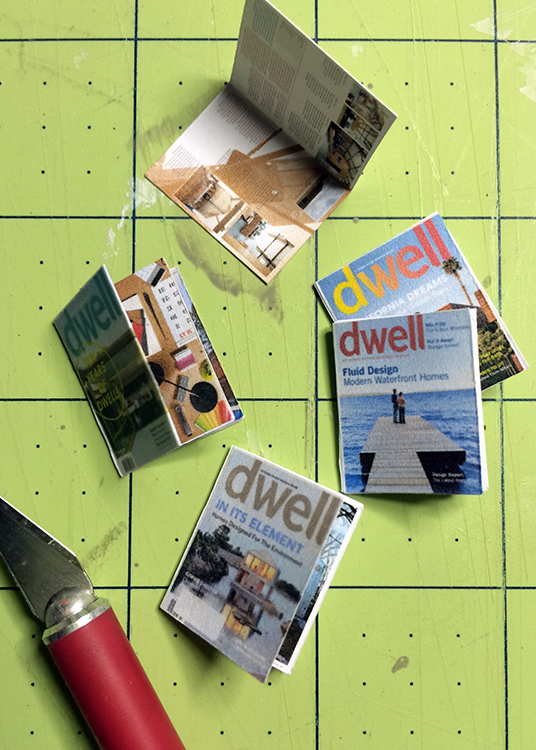 needed to do some research in back issues of dwell 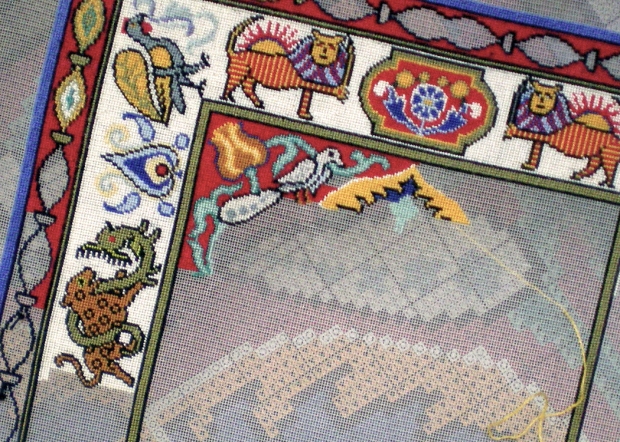 the leopard and the snakey-beast

This motif was one of the most agreeable to stitch, and watching it emerge was very satisfying. I changed the snakey-beast’s colorway with two shades of olive green and gave it a red eye. The leopard’s eye is the same bright olive because the two are regarding one another, entwined, and I kept thinking about Paul Schrader’s 1980s film Cat People, and hearing Giorgio Moroder’s soundtrack and David Bowie’s voice singing “…I’ve been putting out the fire, with gasoline…” So now you have an eensy insight into why this is my favorite motif thus far.

The leopard’s spots were worked by my third-grade self, when “How the Leopard Got His Spots” from Rudyard Kiplings’s Just So Stories was one of my best beloved books.

Before this, I thought the striped lion was my favorite animal, with its Nepalese flag-reminiscent rising sun and its music Yeah Yeah Yeah’s Gold Lion. Curiously, I learned that until 1962, both emblems of that flag had faces; they were removed for “modernization”. Natalia’s chart has faces on its suns which I chose to omit. Me and Nepal, thinking modern. And the Gold Lion lyric, “Gold lion’s gonna tell me where the light is / Take our hands out of control” is an interesting concept to consider when making tiny stitches. 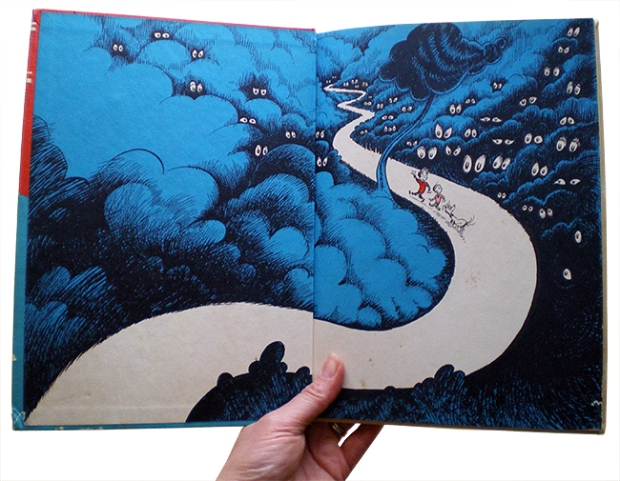 I walk with Dr. Seuss

Sometimes it’s possible to trace the source of a lifelong affection to a single defining moment. For me, it’s typography and On Beyond Zebra!

The places I took him!
I tried hard to tell
Young Conrad Cornelius o’Donald o’Dell
A few brand-new wonderful words he might spell.
I led him around and I tried hard to show
There are things beyond Z that most people don’t know.
I took him past Zebra. As far as I could.
And I think, perhaps, maybe I did him some good…

Dr. Seuss was a grand influence on my life. I discovered I knew how to read — hooking up words with the shapes of letters — entertaining my younger brother by reciting the memorized verses while showing him the pages of One Fish, Two Fish, Red Fish, Blue Fish and The Cat in The Hat.

Since that moment, my enjoyment of reading and the configurations of letters has been intrinsically linked. The achievement of On Beyond Zebra! is the suggestion that I could make up my own letters, and therefore express something that was uniquely me. Something necessary, and before that, impossible. And to do so… beautifully. With letters! 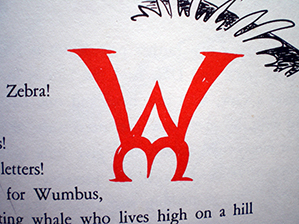 So, on beyond Zebra!
Explore!
Like Columbus!
Discover new letters!
Like wum is for Wumbus,
My high-spouting whale who lives high on a hill
Who never comes down ‘til it’s time to refill.
So, on beyond Z! It’s time you were shown
That you really don’t know all there is to be known.

It was this exhortation, to explore and discover, combined with the reminder that I did not, in fact, know all there is to be known, that keeps me curious and eager to learn new stuff. And to draw alphabets, and study all the ways they have ever been drawn. Different shapes have different meanings, and in typography they are subtle and profound. Words are power. Dr. Seuss knew children can understand this.

Happy birthday, A. A. Milne. The winter I was nine years old, my mother gave me a set of the Winnie the Poohs and the two poetry books as an early Christmas present, just before we set off a on train trip to visit my aunt and cousins in Minnesota. I read them over the next few days in between exploring the free-range world of the train, from San Jose to Minneapolis, cradled in the stiff velvet splendor of the dome car seats.

A. A. Milne, your work (and that of your illustrator E. H. Shepard) expanded my universe and bent my mind in a fundamental way, and I was a better person after that. Thank you.

“Wherever they go, and whatever happens to them on the way, in that enchanted place on the top of the Forest, a little boy and his Bear will always be playing.”