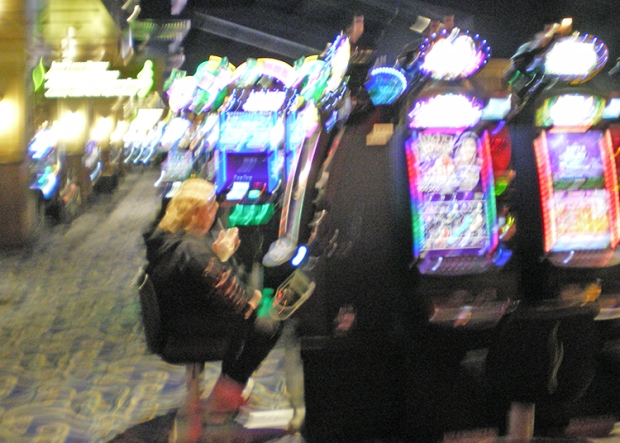 Last night after the awards ceremony for VolunCheer 2011, at which Mr Speed and a group of his musical coworkers were recognized for benefit events they put on to support the family of one of them who contracted and died of ALS, a few of us gathered for drinks at the bar. This is when the reality of life goes on, for those of us who are alive — survivors — and reverts back to everyday concerns, such as finding common ground and entertaining one another.

The entire second floor of the casino / event center — which is huge — is (thankfully) smoke-free, and coincidentally, sparsely populated. Still, the ambient noise of repetitive, demon carnival slot machines and pop music, combined with the thousand points of light of neon signage and whateverthefuck those ceiling fixtures are made of, not even beginning to think about what all these people are actually doing here? adds up rapidly, for me, to one of the circles of hell.

On an unexpected redeeming side, however, was the ceiling above the bar, an enormous, undulating map of Rhode Island — which has a lot of coastline — painted in pleasant blue and yellow. I enjoyed studying it, zoning out of conversation dominated by workplace talk. By the end, though, we were talking about our kids, milestone birthdays, and the small details of the satisfactions of life.

It had mostly stopped raining as we drove home, largely in silence, comfortable, to the ecstatic dog, the house in the woods, the welcoming bed, the whispering reminder to remember, what is important, what matters, while we can.