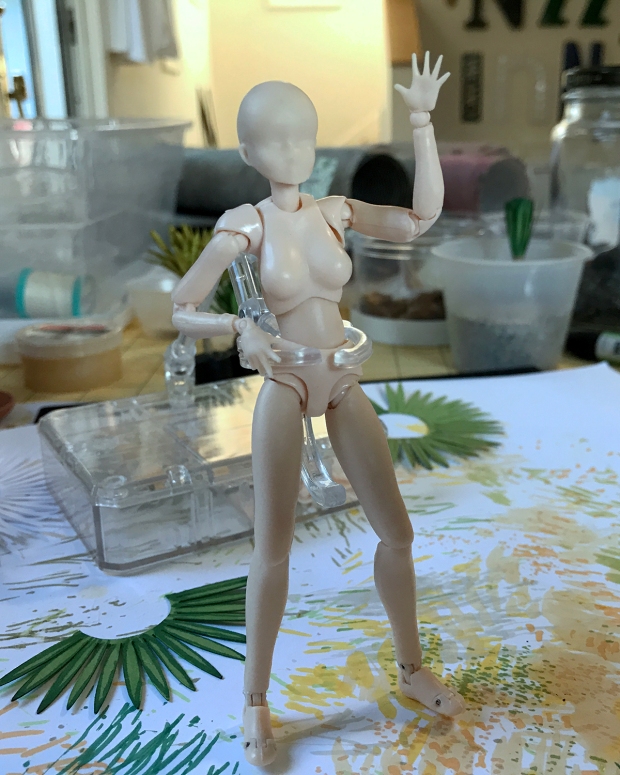 My long-awaited Body Chan figure from Bandai finally arrived. She’s meant to be an artist’s model, or as the packaging proclaims “Pursuing Character Expression through Humanoid Action.” I had hoped to use her as a modern miniatures set figure, alongside Stormy and Zilly, or maybe to even replace them. She’s incredibly posable with like 30  points of articulation (some incomprehensible), several sets of hands, and essential modern accessories: smartphone, tablet, flip phone?, laptop, gun, katana. I so wanted to love her.

But. For my purposes, she’s too distracting: very naked (although she is sculpted with underpants on), and too slight (and anorexic) — in some areas — with thighs narrower than her lower legs, and five inches tall. Too anime. (Although this is Bandai’s express intention: “By design that commitment pulled, and reproduce the optimal head and body balance in anime characters.”)

Still. Very expressive and well-made. There is a male figure available, as well — I assume he has his underpants on, too. Both come in two colors: pale orange (pictured) and gray, which I thought looked like the sad shadow of death.

I know I tried to use this model outside its intended purpose, and really, it’s beautifully made, and I got it on sale at half-price, and she’ll be fun to pose in unexpected locations, so I’m not totally disappointed. Maybe tomorrow, there could be a Bandai meetup with the aforementioned characters… unless it’s just too dissonant to post.